Thank you for your patience while we retrieve your images.

Created 14-Nov-07
Modified 15-Nov-07
Visitors 3402
25 photos
This exhibition ran from July through December, 2006, at Sweet P’s café in Saranac Lake, N.Y. In that venue, it consisted of fourteen framed photographs. In October, 2006, the exhibition was reconfigured into a “slide show” presentation for the annual meeting of Historic Saranac Lake, the historic preservation organization that has put 180 of Saranac Lake’s buildings on the National register of Historic Places. Four nudes were subtracted and fifteen images of the local village-scape were added to make a total of 25photographs. That show, with my narration included, is presented here.

I received my first camera, a gift from my father, in 1954, when I was six years old. It was a Kodak Brownie Starflash, which I still possess. It took 127-size film -- black-and-white or color -- which came back from the corner drugstore as 3 x 3-inch glossy prints. The film I used most in this camera was Verachrome pan, which was black-and-white. I did use some color film, but that was pretty pricey for a photographer my age. The childhood request: "I'd like a roll of VP 127, please," still lurks upon the back shelves of my memory. As I grew older, my father gave me increasingly sophisticated cameras; and I soon graduated to color slide film, which I used exclusively for nearly a decade. In 1971, I began working for the Adirondack Daily Enterprise. I had been hired as a proofreader, but it wasn't long before I began photographing and writing for the paper; and, of course, at that time, newspaper pictures were strictly black-and-white. Except for my earliest years, I had been shooting exclusively in color. Photographically, I was entering a new world. Bill McLaughlin, the legendary Enterprise columnist and photographer, who rarely was seen in public without his trusty Pentax, instructed me in the basics of darkroom procedure -- one lesson, and I was on my own. Thus began for me a revolution in the way of seeing things, an adventure in monochrome, documenting the Saranac Lake scene.

And what was I doing when I wasn't being paid to chronicle the life of my village? I was doing it on my own time, for the simple joy of it. The Saranac Lake of the 70s was not the Saranac Lake we see now. There were more buildings and fewer parking lots; there were more essential small businesses, and no corporate fast food outlets; and there was a lot of peeling paint -- but I loved the scuffed and dog-eared beauty of the place, compelling in its soulfulness in a way not readily replicated by today's well-scrubbed restorations.

In the spring of 1975, I began the first of four semesters of photography at the Lake Placid School of Art. Here I learned correct darkroom procedure. Most importantly, I was awakened to the history of this alchemical art and its evolution through the eyes of its most talented practitioners. I was deeply moved by the way these artists interpreted the world around them, and I incorporated the essence of their aesthetics into my personal view of what photography should be.

My employment with the Enterprise ended in February of 1976, and my days as a student at LPSA came to a close in May of 1977. By then, I had my own darkroom, where I continued my work until May of 1980. Then I moved to San Francisco for a year and have photographed almost entirely in color ever since, reversing my mode of the previous decade -- a time during which I had the fortunate opportunity to capture a face of our village that is rapidly fading from our collective consciousness.
Categories & Keywords
Category:
Subcategory:
Subcategory Detail:
Keywords:1970s, Saranac Lake
© Phil Gallos

The Photographer, Himself (February, 1976) 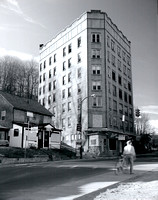 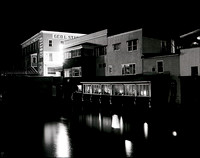 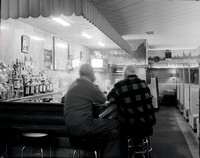 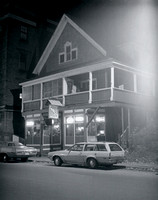 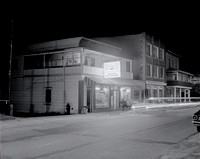 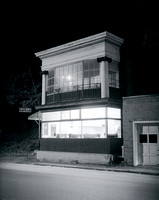 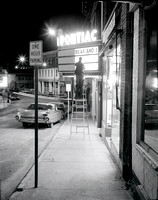 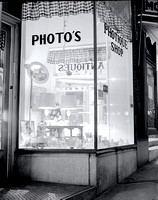